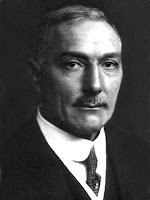 Wilfred Harris (1869-1960) was born in Madras, India, the son of William Henry Harris, Surgeon General, India Medical Service. Educated at Cambridge and St. Mary’s Hospital, Harris qualified in 1894. Between 1901 and 1902, he was Resident at the National Hospital for Paralysis and Epilepsy, where he worked under John Hughlings Jackson and William Gowers. In 1905, Harris became Assistant Physician in St Mary’s Electricity Department, which converted in 1907 to the first Department of Neurology in the United Kingdom. In 1909, he became Full Physician. He also worked at Maida Vale Hospital for Nervous Diseases (1903-1945). During the First World War, this collector of silver spoons, was distinguished as Captain RAMC. He was known as a specialist in diseases of the nerves with interests in neuritis, facial neuralgia, and epilepsy. He was married with three children.