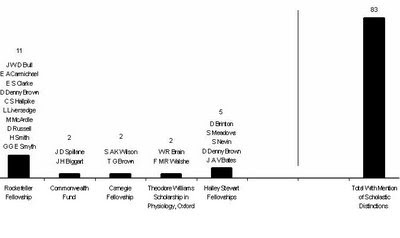 British neurologists (n=100) active during the Interwar Period performed highly during the course of their education: 12 received gold medals for academic achievement, 13 special academic prizes, 23 scholarships, and 23 received research fellowships following the completion of their degrees.

Edgar Adrian (1889-1977), at the time of his death, still held the honourable position of having received the highest marks ever given at Cambridge. Listed separately here are fellowships that may be a particular interest. Notable is that both F. M. R. Walshe and W. R. Brain were awarded the Theodore Williams Scholarship to work with Nobelist Charles Sherrington. Derek Denny-Brown also worked with Charles Sherrington before coming to the Boston City Hospital.

Though numerous figures in British neurophysiology, neuropsychiatry, and neurology received travelling fellowships from the Rockefeller Foundation, only listed here are those who received awards to continue training. Others, such as Edgar Adrian, who eventually became a Trustee of the Foundation, received occasional travel subsidy from the Foundation throughout their careers. It is noteworthy that Dorothy Russell and Honor Smith (2 of 4 women in British neurology before 1960) received Rockefeller Fellowships. Russell spent her time with Wilder Penfield at the Montreal Neurological Institute and with Adolf Meyer in Baltimore. Honor Smith spent a year at the Boston Hospital for Sick Children before returning to Oxford where she worked in one of the MRC’s Peripheral Nerve Injury Centres.

Email ThisBlogThis!Share to TwitterShare to FacebookShare to Pinterest
Labels: Demography