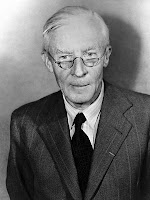 The co-winner with Charles Sherrington of the 1932 Nobel Prize in Physiology and Medicine, Edgar Douglas Adrian was born in London, the son of Alfred Douglas Adrian, a prominent civil servant. Educated at Cambridge, St Bartholomew’s Hospital, and the National Hospital for Paralysis and Epilepsy, Adrian was a distinguished student, achieving the highest marks ever given to a Trinity Student. At Cambridge, he was Foulerton Research Professor from 1929 to 1937, later became Master of Trinity College from 1951 to 1965, and then Chancellor of the University (1968-1975). His research ranged from studies of sensory neurons to observations on the Berger rhythm. In 1942 Adrian was awarded the Order of Merit, and in 1955 created Baron. Edgar Adrian was one of the most prominent and powerful scientists of his generation, both in Britain and abroad. He was the only non-American in history to become a member of the Board of Trustees of the Rockefeller Foundation. Margaret Thatcher described him as one of her greatest influences as a student. In 1923 Adrian married Hester Pinsent; they had three children. During the Second World War, the Adrian's sent the younger two - twins - to stay with Detlev Bronk in the United States. Adrian used his twins as an excuse to visit the United States, where he engaged in War-time activities related to the scientific and medical defense of Britain.