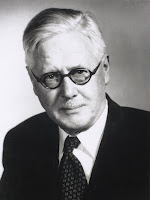 Joseph Godwin Greenfield (1884-1958) was born in Edinburgh, the son of W. S. Greenfield, Professor of Pathology and Medicine. Educated at Edinburgh University, where he trained under Byrom Bramwell, Greenfield qualified in 1908. After holding resident appointments at the Edinburgh Royal Infirmary, Greenfield moved to London where he was appointed pathologist at the National Hospital for Paralysis and Epilepsy in 1910. In 1914 he succeeded Samuel Alexander Kinnier Wilson as Dean at that Hospital, retiring in 1949. A frequent adviser to the Medical Research Council, Greenfield, along with others, founded the Neuropathological Club. This became the British Neuropathological Society in 1962. Remembered more for his laboratory technique than his lecturing style, Greenfield’s many publications, books and articles, gave him a significant reputation internationally. His first major work was Pathology of the Nervous System, which he co-authored with E. Farquhar Buzzard, appeared in 1921. His major textbook – Neuropathology – appeared in 1958. He was married and had two children.