Bloomsbury London has many charms. One can walk from the British museum through Russell Square Gardens and stand in amazement on sidewalks of High Woburn, sensing hints of a vibrant life beneath the rather drab, post-war façade of shops, restaurants, and cheap hotels now lining it and the adjacent streets. It is clear why Ronald Blythe emoted on the district in his Age of Illusion. Literati like E M Forester, T S Elliot, W H Auden, the Woolfs, and others from that part bohemian-bourgeois intellectual ‘group by invitation’ presented a rich fusion of celebrity and extant sources for his understandably romantic contemplation. Indeed this group created much of the Bloomsbury atmosphere still resonating there today.

One prominent neighborhood contributing to Bloomsbury’s past vitality (although modestly so) is a small bronze-fenced garden just off Lambs Court Row, called Queen Square. This square and its surrounding buildings housed in the nineteenth century a moderately wealthy intellectual class who lived and sometimes worked in the multitude of humane institutions that sprang up there during this period. There William Morris’ workshop, the Art-Workers Guild, the Foundling Hospital, the Italian Hospital, the Homeopathic Hospital, and the College for Working Women and Men formed a community creating what Robert Louis Stevenson described slightly earlier as an area of London “sacred to humane and liberal arts”. Unlike the dreary gas-lit depictions of interwar London immortalized in, for instance, Graham Greene’s 1934 classic It’s a Battlefield, Queen Square was the place where a poet could pause to ponder morning sunshine, the coming spring, pigeons, and innocently note:

Four Hospitals
Standing there
Worlds of their own
In a quiet square. 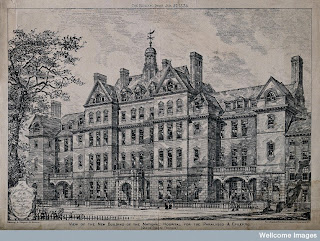 Today the square is almost completely dominated by one hospital, now called The National Hospital for Neurology and Neurosurgery but originally known when it was founded in 1859 as the National Hospital for Paralysis and Epilepsy. Overtime this hospital’s name has changed. In 1926, for example, it became the National Hospital for the Relief and Cure of Diseases of the Nervous System including Paralysis and Epilepsy. Not surprisingly such a protracted name was shortened frequently to the National Hospital for Nervous Diseases, and then euphemistically to either the National Hospital or simply Queen Square. To a physician in the interwar period, the latter would have said it all. Queen Square: the name could convey so many different meanings to so many different people, but for those few physicians who worked and trained there in the late nineteenth century through to the post-war era, it indicated a lifestyle and a habitus, a seemingly acquired set of appreciations and perceptions which were reproduced in each subsequent generation of physicians training and practicing in the wards and laboratories of that world centre for the study of nervous diseases.
Posted: Stephen T Casper

Email ThisBlogThis!Share to TwitterShare to FacebookShare to Pinterest
Labels: Reflections