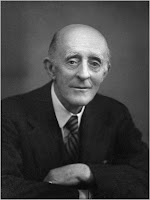 Anthony Feiling was born in Surrey, the son of Ernest Feiling, a stockbroker. He received his B.A. from Cambridge's Pembroke College in 1906 before beginning his medical training at St. Bartholomew's hospital. He received his medical qualification in 1909. After serving as captain in the Royal Army Medical Corps during the First World War, he held various appointments at several London hospitals, including a deanship of the medical school at St. George's Hospital (1926-1936) and a physicians position at the Maida Vale Hospital for Nervous Diseases. Although he was primarily a general physician, he was deeply interested in neurology. He was a member of many neurological societies in England as well as in France and America and was the editor of the volume, Modern Trends in Neurology. He was socially regarded as "a character" and had a penchant for travel. Feiling was related to Kenneth Grahame, author of The Wind in the Willows, and he and his brother, Sir Keith Grahame Feiling, the Oxford historian, both inspired characters in the novel. In 1919, Feiling married Helga Hawkins. They had one son.


This article is part of an on-going series of biographies published in this blog.
Posted: Kanyin