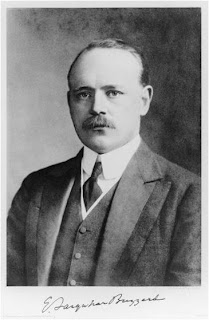 Edward Farquhar Buzzard was born in London, the son of Thomas Buzzard, a founder of British neurology. Initially more renowned for his athleticism than his academics, he attended Oxford University's Magdalen College and received his medical training at St. Thomas’s Hospital, eventually qualifying in 1898. Training under his father, Thomas Buzzard and John Hughlings Jackson, whom he had known as a boy, Buzzard became Physician to Out-Patients in 1905 at the National Hospital for Epilepsy and Paralysis. He held various positions including a lecturer at the Royal Free Hospital and a position at the Belgrave Hospital for Children. From 1910 until 1926, he was Physician at St Thomas’s, a position he held until being appointed Regius Professor of Medicine at Oxford. He also served in a medical capacity in WWI. A shooter and fisherman, the unusually silent Buzzard was created Baronet in 1929. He was also appointed Physician Extraordinary to the King in 1924 and 1932. He was a member of many organizations including the Association of British Neurologists (ABN), the Royal Society of Medicine (RSM), the British Medical Association (BMA) and the Association of Physicians. He eventually became president of the ABN, RSM and BMA. He was awarded the Osler Medal in 1940. Although his writing skills were valuable and sound, he was regarded as a somewhat ponderous lecturer. Nevertheless, though he was primarily a neurologist, he excelled as a clinician in every branch of medicine. He eventually published a monograph on the pathology of the nervous system. He married May Bliss; they had five children.

This article is part of an on-going series of biographies published in this blog.
Posted: Kanyin