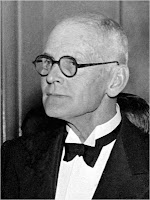 Charles Putnam Symonds was born in London. He was the son of Charter Symonds, a surgeon at Guy’s Hospital. Symonds was educated at Oxford University's New College and Guy’s Hospital, where he trained under Arthur Hurst. Symonds received his medical qualification in 1915. In 1919, he was appointed to National Hospital, Queen Square. The same year, he became the medical registrar at Guy's Hospital and was quickly promoted. Soon after, he was deployed to France, where he served courageously and was eventually awarded the Médaille militaire, a prestigious medal issued for acts of bravery. Some of his letters from this period survive. After studying at Johns Hopkins Hospital in 1921 with Adolf Meyer, Symonds became Consultant Physician in Nervous Diseases at Guy’s Hospital and Physician at the National Hospital for Paralysis and Epilepsy. He was remembered as “the neurologist’s neurologist”. Internationally renowned and a frequent government consultant, this fly-fisherman, became Civilian Consultant Neurologist to the Royal Air Force in 1935 and was knighted in 1946. Symonds married Janet Poulton in 1915 (d. 1919); they had two sons. In 1920, Symonds married Edythe Dorton; they also had two sons. As an interesting footnote, some recall that Symonds described himself as a Consultant Physician in Nervous Diseases. That title came to appear a bit of an anachronism, but it factually captures the history of his appointment at Guy's Hospital. Symonds was among the generation of physicians who became neurologists (i.e. they began their careers before the specialty had achieved recognition within British medicine and ended their careers after the specialty had become autonomous).

This article is part of an on-going series of biographies published in this blog.
Posted: Stephen T Casper