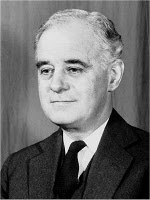 Denis John (DJ) Williams was born in Bangor, Wales, where his father was a Presbyterian Minister. He received his Bachelor of Science from the University of Manchester in 1929 and his Bachelor of Medicine and Bachelor of Surgery from the University of Manchester in 1932. After qualifying in 1932, Williams was awarded a Rockefeller Traveling Fellowship to study neurology with Stanley Cobb at Harvard. There he began using EEG Machinery, eventually bringing the first EEG apparatus intended for clinical purposes back to Britain. He was elected to the Association of British Neurologists in 1945 and was a very active member. A Halley Stewart Research Fellow at the National Hospital for Nervous Diseases, Williams became Consultant Neurologist in 1946. He also became a lecturer in Neurology there and was known for his charisma, cleverness, articulateness, his nimble mind and elegant dress. That year, he was also appointed Consultant Physician to St George’s Hospital. He became Civil Consultant in Neurology and Electroencephalography to the RAF in 1951. A Vice-President of the Royal College of Physicians London, Editor of Brain, and a Founder Trustee of the Brain Research Trust, Williams was married with four children.
Posted: Kanyin