Neuroscience on Art and Law: A Reflection on Recent Essays by David Eagleman and Mark Changizi

It's hard to own a spine these days. All anyone wants to talk about is the marvelous structure that is our “brain.” The poor spinal cord has been relegated to a distant, presumably dusty, corner. The brain gets all of the accolades. It wins all the prizes. And it's never runner-up in any beauty pageants. It's “three pounds of the most complex material in the universe,” and that fact, according to David Eagleman in a recent article in The Telegraph, accounts for why humans have done something truly extraordinary: “As far as we know, we’re the only system on the planet so complex that we’ve thrown ourselves headlong into the game of deciphering our own programming language.”

At the same time, we are almost wholly ignorant about the brain. This is the brain difficulty: “we don’t understand the brain.” That’s Mark Changizi, a smart and charismatic guy, who writes in Psychology Today, “Although the field is jam-packed with fantastically clever experiments giving us fascinating and often valid data, there is usually very little agreement (or ought to be little agreement) about how to distill the data into broad principles. And the broader and higher-level the supposed principle, the more controversial and difficult-to-defend it is.”

But what about the poor spine? And let’s not forget about those other marvelous elements of the central nervous system – the eyes. Weren’t they supposed to be the window to the soul? It's easy to ignore reflexes. They aren’t very interesting. And certainly a lowly peripheral neuron located in the arm is of little interest to anyone (provided, of course, its functioning). But surely the eyes and the spine deserve a little attention. And what about the heart? Aren’t there matters of the heart and facts of the mind?

At this moment I’m hungry. Is that a mere matter of concern to the brain only or does the stomach have some role here? The brain is inspiring – but so is food poisoning. If you’ve had some undercooked chicken, then your body knows it. And even if your brain didn’t bother to register the fact by alerting you to the agonizing fact that you want to die now, your body’s gastro-intestinal crises of severe proportion would have made it fairly clear that you are, and have always, been a member of the coelomatic party.

The Parable of the Stomach and Spine

The spine matters a lot. It's like the proletariat to the bourgeois elite. It actually does the work of telling the brain a lot of really important stuff. But it is clearly vulgar; it has no sense of the higher things in life: art, culture, laws, and spirituality. You know - the stuff that makes us human. But the curious things is that if you ask a neuroscientist why we sleep, what a “thought” is, what a “memory” is, or even a “voluntary decision,” then you end up in a strange sea of metaphors. And strange arguments start to be made about wiring, computing, input-cpu-output, and parallel processing. But it is not clear why any of these “properties” of neurons (if metaphors can be properties) ought to be different in the brain than in the spine. So could your mind also be partially embedded in your spine?

This question really isn’t rhetorical. The spine might have some different functions from the brain, but if neurons in the brain have certain properties, why is it such a stretch to ask if those properties might extend throughout the nervous system? If, as Margret Boden observes in her two volume history of the cognitive sciences, the mind is a digital product of brain, then it surely follows that mind is a digital product of nervous tissue generally. There is a long history here of materialist (and dualist) theories of the mind – review, for instance, Descartes, Spinoza, Julien Offroy de La Mettrie, Bichat, George Henry Lewes, John Hughlings Jackson, Ivan Pavlov, and Charles Sherrington, etc.

My point is that when neuroscientists or theorists begin to apply themselves to such complicated questions as what can the neurosciences tell us about the law or art, it is not wholly irresponsible to begin to relate the parable of the stomach or spine. You see, while my essay here appears to be merely rhetorical, in fact, the corollary is truer for David Eagleman and Mark Changizi's essays. Both of which appear to be objective, contemplative and thoughtful analyses of how the neurosciences matter in the 21st century.

Changizi’s essay is - perhaps - less alarming than Eagleman’s. Changizi wants to explain art in evolutionary terms (evolution can sometimes be interesting to contemplate). He argues in his essay that firstly: “the arts have been culturally selected over time to be a “good fit” for our brain, and our brain has been naturally selected over time to be a good fit to nature.” He then adds, secondly, that we could consequentially hypothesize that: “perhaps the arts have come to be shaped like nature, exactly the shape our brain came to be highly efficient at processing.” This is a clever idea, and his essay offers some examples from writing and music to illustrate his thesis. Changizi’s argument makes use of a device that Darwin used in his “Origin of Species”. Where Darwin uses “artificial selection” to argue for the possibility of “natural selection” (with hand-waving towards Thomas Malthus), Changizi hand-waves at “taste,” and offers a reciprocal relationship between cultural selection and the natural selection of the brain to explain the origins of the arts.

Now what is clever about this idea is that it seeks to find reductive characteristics in the arts and link those units to nature. There is a trace here of the foundationalism of, say, L. J. Henderson’s “Fitness of the Environment”. But the problem is that the arts are empirically not “fundamental units” even if they possess "fundamental units." It would be banal to say that our three-dimensional perspective dictates how we see “art”. Of course it does. But we don’t see or hear “art”. We feel it. That’s why we know the difference between “art” and “pornography”. That one could scientifically establish “fundamental units” within the arts does not explain the origins of art (for the same reason that axioms in maths are not equal to mathematics). By contrast, the fact that some people have famously pronounced certain forms of art degenerate, does. You see the thing about “taste” in art is that it tells us more about human relations than it does about cultural selection and brains. The act of labeling something “kitsch” or recognizing that a “The Well-Tempered Clavier” is good, while “Carmen” is bad, tells us a great deal more about the nature of “art” than Changizi’s neurobiological origins. Art is about a consensus between people. In a period, characterized by democracy, the arts will invariably suffer – if we are to believe De Tocqueville – because the democratic love of equality will 'lower the tone'. In a time, when there is a wide-spread hatred of equality, power-relations will quickly establish the limits of taste. “Art” is made through an exercise of power. If the rich industrialist likes it, then it must be good.

In-so-far as Changziz’s argument follows in a long intellectual heritage of seeking scientific explanations for human culture and relationships, it is mostly harmless, and even perhaps exciting to ponder. But we’d best recognize that arguments like his are part-and-parcel of a growing acceptance for neuroscientific explanations for everything. Hegel is quoted somewhere as having expressed the view that history repeats, first as tragedy and second as farce. Changziz’s theory (and we could to point countless others) can be understood as underpinning a second version of a new eugenics, a neuro-eugenics (my word), that appears to be rapidly acquiring wide-spread acceptance. Despite the fact that neuroscientists can’t even define a “thought” without resorting to metaphor, the cultural currency now is to put a “neuro” texture on everything from “self-help” to “education”. If the brain-sciences say it is “true”, then it must be “true”.

Why your brain is not the reason you should go to jail.

As my brief aside about De Tocqueville foreshadows, the whole question here is about power and equality. It is for those reasons David Eagleman’s discussion of neuroscience and the law is really troubling. “Neuro-Law”, as the neologism goes, is the cutting-edge of interdisciplinary studies. And I don’t doubt that all of the people working in this area have good intentions. But there is an underlying edge to these humanitarian aims that is decidedly authoritarian. Eagleman writes: “The problem is that the law rests on two assumptions that are charitable, but demonstrably false. The first is that people are “practical reasoners”, which is the law’s way of saying that they are capable of acting in alignment with their best interests, and capable of rational foresight about their actions. The second is that all brains are created equal. Everyone who is of legal age and above an IQ of 70 is assumed, in the eyes of the law, to have the same capacity for decision-making, understanding, impulse control and reasoning. But these ideas simply don’t match up with the facts of neuroscience.” Get that? Some people are better than others – that is a fact of neuroscience.

You’d better be thinking Orwell, Huxley, and Philip K Dick. And I’m not exaggerating circumstances. You see if neuroscience offers explanations about everything (the origins of art, self-interest, etc) then it can shape and will shape the common law system. In other words, be prepared for arguments that take all of those cultural messages one step further and begin to argue for a return to protections for the elite based upon the promises of their ‘divinely’ fortunate neurobiology. Doped up on the best brain drugs money can buy, married into the best gene-pool available (this Fukuyama when he's good), our betters will be blessed with “knowledge” about our needs. They will, no doubt, be generous patricians. But enter into the court of the neuro-inquisition and be prepared to have the faults of your neurobiology placed before a jury of your peers. Good luck. With the current cache of the neurosciences, you, as Fernando Vidal puts it, are your brain. And if a lawyer can find a brain scientist who pronounces you a victim of an unfortunate “wiring” accident, then don’t be surprised if all manner of accusations about illict thoughts, deviance, anarchy, and a failure to comply with the benevolent intentions of your betters, become quick shorthand for “requires institutionalization”. We live, it seems, in Terry Gilliam’s “Brazil.”

A Conclusion of Sorts 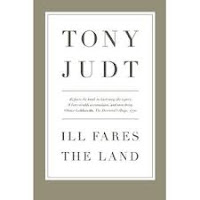 Recently I’ve been reading Tony Judt’s “Ill fares the Land”. Judt argues that over the last three decades Western culture has gravitated towards a nihilistic individualism that has destroyed both notions of equality and a faith in collective action. The rhetoric of modern neuroscience is making the organ of the mind a totem to that individualism. Polemic and rhetorical as this essay might seem, the parable of the stomach and spine surely shows us that those words more fairly describe the unsubstantiated arguments of the other side (as reasonable and interesting as such essays seem). Until neuroscience can define “thought” (or "mind") in non-metaphoric language, it offers at best observations about how human beings experience reality. Observations, by their nature, are singular events. Inferences drawn from thousands of them will always remain tentative. Art and law are products of human labor. Beyond that, we know very little - certainly not enough to call for a transformation of the legal system. What was it that Burke said about our ancestors? He had a point.
Posted: Stephen T Casper