Book Review: Charles G. Gross, A Hole in the Head: More Tales in the History of Neuroscience 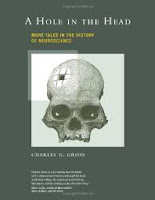 Charles G. Gross’s A Hole in the Head: More Tales in the History of Neuroscience [2] offers a collection of essays bound to delight students, clinicians, and historians. Most of these essays had been previously published, but several of them have been substantially expanded and reworked for this volume. All show a great sense for audience and most represent a valuable contribution to history. The topics of the essays are quite wide-ranging, covering, for instance, early neuroscience, trepanation, vision, Claude Bernard’s contributions to physiology, neurogenesis, and echolocation.

Generally practitioners of science and medicine approach the writing of history from a perspective slightly different than social or cultural historians. A Hole in the Head is no exception to this rule – indeed the summary of the volume makes that fact explicit as it presents questions about why practitioners pursue “blind alleys and errors”. Typically such concerns lead to a somewhat amateurish sense of history, but Gross’s sophistication never succumbs to simplistic interpretation. He achieves – like Janus – the ability to look backward and forward. Indeed, the volume shows a concern for what Owsei Temkin observed in his own historical practice as a need to be “both methodically useful and historically instructive” for the present. [1] Because the essays in this volume are highly diverse, it is perhaps best to briefly offer two examples of the above preoccupations, which may also suffice to illustrate the appeal of the volume and its thoughtful approach.

One of the more remarkable essays focuses on Joseph Altman and Adult Neurogenesis. In this essay, Gross observes that the prevailing dogma for generations was that the adult mammalian brain did not produce new neurons. That dogma was challenged by Joseph Altman through a series of largely ignored but prestigious publications in Science, Nature, and the Journal of Comparative Neurology. Despite the landmark nature of his publications, Altman was denied tenure at MIT and eventually moved to Purdue University. His early studies were replicated by Michael Kaplan et al, who again published in organs like Science and the Journal of Comparative Neurology. Work in avian brains, which evidently confirmed these findings, while regarded highly, failed to counter the view that primate and mammalian brains did not produce neurons.

Why, Gross wonders, were Altman’s discoveries ignored? The answers are complicated: experts were blinded by the weight of tradition, developmental anatomists opposed the claim, and many were invested in “denying neuronal plasticity” (p. 238). Altman, however, also discovered subsequently that there was “a clandestine effort by a group of influential neuroscientists to suppress the evidence we had presented and, later on, to silence us altogether by closing down our laboratory” (p. 241). Thus Gross takes us beyond the usual intellectual speculations towards a deeper consideration of the structure of scientific paradigms, the nature of which are often dictated by social and political decisions rather than facts. The truth will out, but usually – sadly – later.
﻿﻿
﻿﻿A second and equally thoughtful essay, and one worthy of further illustrating the merits of this volume, focuses on Claude Bernard’s theories of the constancy of the internal environment. Gross begins with an overview of Bernard’s private life and professional work before turning to study Bernard’s theories about the constancy of the internal environment. From his studies of glycogenic mechanisms and blood temperature, Bernard inferred that the stability of the organism physiologically was a necessary condition of “a free and independent life” (p. 195). Despite the profundity of the idea, however, Bernard’s theory took time to be adopted. While there were early proponents, such as George Henry Lewes, it was really in the 20th century and chiefly through the work of Walter B. Cannon and L. J. Henderson that the importance of Bernard’s theory became widely appreciated. Gross notes that the idea of homeostasis was of central formation in the subsequent development of the field of cybernetics during World War II and after.

In sum, Charles G. Gross’s A Hole in the Head: More Tales in the History of Neuroscience is that rare book that contains something of interest for everyone. Many of the essays might be useful in undergraduate neuroscience teaching or in courses focusing on mind, brain, and society. Each of the essays, moreover, contains observations that a graduate student could unpack into a significant and fascinating study for the history of the neurosciences. In other words, it is a book for all seasons.


[1] Owsei Temkin, “The Double Face of Janus and Other Essays in the History of Medicine” (Baltimore: Johns Hopkins University Press, 1977), 20.

[2] A Hole in the Head: More Tales in the History of Neuroscience