Is Neuroscience the Next Battleground?

An essay in Evolution News and Views frames this question as though it is purely a question of the materialist/antimaterialist divide. Or a matter of atheism versus religion. They quote Stanford law professor Hank Greely:

From a scientific perspective the key issue here is determinism. Not all but almost all scientists believe that our minds are determined by physical changes in our brains and that if you knew enough, which they don't believe they do and few believe they will ever know enough, but if you knew enough you could tell what the brain state will be at time T1 by knowing what the brain state was at time T0 and what else happened in between. And from knowing that brain state, if you knew enough, you'd be able to deduce the mental state. And that all of our thoughts and actions in that sense are determined by the physical state of our brain which is determined by physical issues in the universe. That I think almost all neuroscientists believe.

It is fascinating that this debate should be framed this way. Why determinism and not fatalism for example? It surely is not so difficult to extend from determined brain states towards fated social situations. If the Utopian dream of neuroscience is to ultimately understand brain states at time T0, then surely the corollary concern that matters to law professors and policy-makers (and likely neuroscientists as well) is to find an explanation for human action and interaction at T1 and as an effect of brain state T0.

However, just because I will something, does not mean what I will will happen, even if what I will is in accordance with the laws of nature. This is especially the case if everyone around us acts with similar individual abandon.

My point is that T0 is an illusion. It does not exist. Our bodies, even our cerebral selves, are intimately embedded in a stochastic environmental, social, and cultural situation. In a very real sense, our evolutionary past has provided us with neurobiological mechanisms - some like 'area MT' localized in the brain - which hold aspects of that stochastic process at bay. But for T0 to exist we would have to assume that there was a steady state moment in which everything dynamic in our body and outside of our body could be comprehended. I can think of no situation save death in a vacuum where this would be possible. 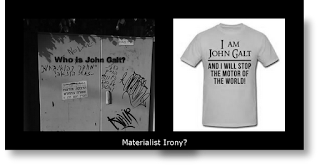 My actual point, however, is that we are very far away from having held any discussion of materialism and anti-materialism. What we are actually describing instead is a discussion between small communities of workers in neuroscience and the contemporary and more widespread cultural purchase of the philosophy of individualism.

That is a very different thing, and it speaks volumes that people cannot often tell the difference.
Posted: Stephen T Casper

Email ThisBlogThis!Share to TwitterShare to FacebookShare to Pinterest
Labels: Neuro-Reality-Check