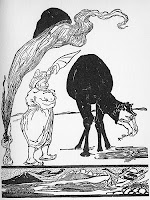 Anthony Gottlieb echoes (here) any number of complaints easily found on the pages of this blog. Having notably failed in certain other illustrious examples, The New Yorker appears to be making amends.

One problem with trying to reconstruct the growth of the mind from Pleistocene materials is that you would need to know what varieties of mental equipment Stone Age minds already possessed. Even if a plausible-sounding story can be told about how some piece of behavior would have helped early hunter-gatherers survive and reproduce, it may well have become established earlier and for different reasons. Darwin underlined the temptations here when he wrote about the unfused bone in the heads of newborn humans and other mammals, which makes their skulls conveniently elastic. One might conclude that this trait evolved to ease their passage through a narrow birth canal, but it seems to result from the way vertebrate skeletons develop. Birds and reptiles hatch from eggs, yet they, too, have these sutures.

Textbooks in evolutionary psychology have proposed the hypothesis that the fear of spiders is an adaptation shaped by the mortal threat posed by their bites. In other words, we are descended from hominid wusses who thrived because they kept away from spiders. The idea is prompted by evidence that people may be innately primed to notice and be wary of spiders (as we seem to be of snakes). Yet there is no reason to think that spiders in the Stone Age were a greater threat to man than they are now—which is to say, hardly any threat at all. Scientists who study phobias and dislikes have come up with several features of spiders that may be more relevant than their bites, including their unpredictable, darting movements. Natural selection would have played some role in the development of any such general aversions, which may have their origins in distant species, somewhere far back down the line that leads to us. But that’s another story, one that evolutionary psychologists have less interest in telling, because they like tales about early man.