Primary Source: The Integrative Action of the Nervous System 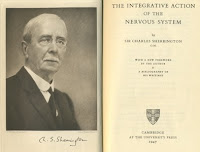 Sir Charles Scott Sherrington (1857-1952) was born in Islington, London. His father died while he was still very young, and his mother remarried a physician in Ipswich. Subsequently, Sherrington went to Ipswich Grammar School. From there, he matriculated to St Thomas’s Hospital and Cambridge, graduating with high honors and eventually completing the Cambridge ScD in 1904. While at Cambridge, he trained under the renowned physiologist Michael Foster, and as a result of Foster’s influence became interested in the physiology of the nervous system. In 1895, Sherrington had been appointed Holt Professor of Physiology at the University of Liverpool. In 1913, he was offered, and accepted, the Waynflete Chair of Physiology at Oxford. Awarded numerous honors throughout his life, Sherrington was created OM in 1924, and later shared the 1932 Nobel Prize for physiology and medicine with Edgar Douglas Adrian. Although he published numerous articles, essays, and books, his most influential work was a 1906 publication of a series of lectures he gave at Yale University in 1904. These lectures were collected under the title The Integrative Action of the Nervous System.

Few works can compare in importance in the history of the biological sciences to Charles Darwin’s On the Origin of the Species by Means of Natural Selection, which appeared in 1859. In many respects, however, The Integrative Action of the Nervous System can be considered its equal in elegance, argumentation, and generality. Moreover and importantly, Sherrington’s Lectures provided a powerful example of the applicability of Darwinian thought for generating testable hypotheses, focused experimental inquires, and finally for producing rational conclusions about the selection and behaviour of biological structures as well as the intact organism.

Sherrington’s text is infused with two fundamental postulates. Firstly, sensory neurons converge from a multiplicity of directions into one firm, patterned response. He wrote, “The organism, to be successful in a million-sided environment, must in its reactions be many-sided.” In other words, some mechanism in the body takes and summates those signals into “a common final pathway” in order to react to that which endangers the organism the most. Secondly, he argued that those converging neurons and many-sided reactions could be seen through experimentation to be reducible to single units, called reflex arcs. The integrative function of the nervous system is to co-ordinate, connect, control, and respond to the effect the whole external world exerts on those single units.

Sherrington’s scientific work reached a wide academic audience, and his intellectual contemporaries – especially philosophers, physiologists, physicians, and psychologists – found in it a powerful line of reasoning, which connected physiology to emotional states and implied implicit and explicit connections between physiology and psychology. Because of these views, the book has been seen as the cornerstone of the modern neuroscientific doctrine. It is that, but it is much more as well. The book was a model for the ways in which physiological experiments and thought could directly influence clinical medicine. It demonstrated the power of weaving together knowledge from such disparate fields as comparative zoology, pathology, histology, chemistry, and psychiatry. Most of Sherrington’s contemporaries and students would have read the book, and for them the theory of integration would have been more than a theory of the nervous system. It would have been an account of how reductionist thinking could produce knowledge of the whole. It would also have been an example of the ways in which medicine and the life sciences were inextricable and convergent. Thus, The Integrative Action of the Nervous System not only demonstrated principles of biology, it indicated a direction and ideal for what would become biomedicine and biomedical research.

Two of my favorite passages

"We have hitherto dealt with reflex reactions under the guise of a convenient but artificial abstraction, -- the simple reflex. That is to say, we have fixed our attention on the reaction of a reflex-arc as if it were that of an isolable and isolated mechanism, for whose function the presence of other parts of the nervous system and of other arcs might be negligible and wholly indifferent. This is improbable. The nervous system functions as a whole. Physiological and histological analysis finds it connected throughout its whole extent."

"It is of course as impossible to disprove as to prove that psychical events accompany, or that they do not accompany the nervous reactions of the spinal animal. It is significant, however, that the best-known controversy (Pfluger, Lotze) as the psychical powers of the spinal cord, occurred prior to the advent of the Darwinian theory of evolution. This latter suggests how purposive neural mechanisms may arise. If furnishes a key to the genesis and development of adapted reactions and among these latter, reflexes.

That a reflex action should exhibit purpose is no longer considered evidence that a psychical process attaches to it; let alone that it represents any dictate of choice or will. In light of Darwinian theory every reflex must be purposive. We here trench upon a kind of teleology. It is widely and wisely held that natural knowledge pursues the question "how" rather than the question "why". The "why" involves a judgment whose data lie so beyond present human experience and comprehension that self-abnegation in regard to the desire to attempt it is not only prudent, but to the unbiased judgment a necessity.

Older writings on reflex action concerned themselves boldly with the purpose of the reflexes they described. The language in which they are couched shows that for them the interest of the phenomena centred in their being regarding as manifestations of an informing spirit resident in the organism, lowly or mutilated thought that might be. Progress of knowledge has tended more and more to unseat this anthropomorphic image of the observer himself which he projected into the object of his observations. The teleological speculations accompanying such observations have been proportionately discredited.

The impetus given to biology by the doctrine of adaptation under natural selection, felt so strongly by morphological studies, seems hardly as yet to have begun its course as a motive force in physiology. But signs being to be numerous that such an era is at hand. The infinite fertility of the organism as a field for adapted reaction has become more apparent. The purpose of a reflex seems as legitimate and urgent an object for natural enquiry as the purpose of the colouring of an insect or a blossom. And the importance to physiology is, that the reflex reaction cannot be really intelligible to the physiologist until he knows its aim.

In general terms we may say that the effect of any reflex is to enable the organism in some particular respect to better dominate the environment. One often hears objections taken to epithets -- common in writings on biology -- "lower" and "higher" as applied to organisms, plant and animal. Such objection seems valid if the phrase assumes that the "lower" organism any less perfectly fulfils its "purpose" or "design" than does the higher, or in those respects in which it has commerced with the environment is any less admirably adjusted than is the higher. But "lower" and "higher" may be used without any connotation of that kind. In the course of evolution a number of organisms have become so adapted to the environment as to dominate it more various and extensively than do other organisms. In that sense some organisms are higher and some are lower. In that sense man is the highest organism. And if evolution be a process of gradual and more or less uninterrupted course it is obvious that the highest form achieved will also be among the latest of the forms achieved. This grading of rank in the animal scale will be nowhere more apparent than in the nervous system in its office as integrator of the individual. The more numerous and extensive the responses made by a creature to the actions of the world around upon its receptors, the more completely will the bundle of reflexes, which from this standpoint the creature is, figure the complexity of the world around, mirroring it more completely than do the bundles of reflexes composing "lower" creatures."