A Quack Doctor in San Francisco as Reported in Dublin 1875 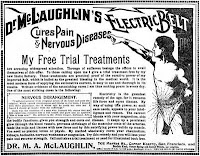 A chapter as yet unwritten in the history of clinical neurology would consider the linkages between unorthodox practitioners and neurology. The following anecodote recorded in Dublin's Freeman's Journal and Daily Commercial Advertiser in 1875 suggests that there must be quite a story to tell:

It is now the province of the Press to crush out recognised illnesses in the social system, which in earlier days were peculiarly the province of the police. The San Francisco News-Letter, whose especial business would seem to be to amuse not only the San Franciscans, but the universe generally, has assumed a more serious tone. No less a task than the clearance array of medical charlatans has been assumed by our contemporary, and as a natural result there have been actions for libel. In the latest, the quack plaintiff was a Dr. Flattery, and his appearance in the witness-box created quite a sensation. The News-Letter had called Flattery a quack and Flattery brought into court a tattered weather “stained piece of sheekskin,” which he declared to be his diploma. It purported to have issued from the Cincinnati Eclectic Medical Institute. Colonel Barnes, counsel for the News-Letter, then asked Flattery to identify a paper in his own writing, in which he stated that he had graduated in the Ohio Medical College. Thus confronted with more diplomas than he wished, the plaintiff said he wrote the Ohio document himself for the puporse of “humbugging the slimy den” – meaning the News-Letter office. He was then handed a pamphlet or thesis on “Noorollergy,” which, after a good deal of bickering and sparring was discovered to be intended for Neurology. Having got thus far, it was discovered that our physician did not know the meaning of the word. The judge, who was waggish throughout, requested him to give up “ the caressing way in which he manipulated his nose” and to answer the questions in an audible voice. Then counsel started a spelling bee, which ruined the poor quack altogether. Being asked to name the leg-bones he replied “the femur” and could not get further. Therapeutics he announced as a branch of material medica. The bone which terminates the spinal column – the coccyx – he took in the plural number, the coccyges and declared he could not spell the word. In the end it was made quite clear that the fell had no right whatever to practise medicine and surgery, and the case was dismissed. During the proceedings he had torn up a paper in displeasure, and the Judge had fined him $20. He was not able to pay the fine, so he cannot have done much harm to the San Franciscans. It is to be hoped that “Dr Flattery” will not take in Ireland on the route which he will doubtless speedily set down for his especial traverse. There are already too many of his tribe in Dublin doing irremediable harm every day.