Hardwired: The History of a Word

Metaphors, words that refer to one thing in order to explain a likeness, similarity or analogy with another different thing, are rife in neuroscience. Some of them are really difficult to detect: neurotransmitter, for example, appears on the surface to be innocuous enough, until one recalls that Adrian, Gasser, Dale, Lucas, and others were using the relatively new technologies of vacuum tubes and oscilloscopes, and then suddenly a host of implications become possible. Sherrington referred occasionally to the telegraph as a means of explaining the integrative action of the nervous system, and there are countless other examples.

Among the most commonly used metaphors in neuroscience – or at least popular neuroscience writing – is the word “hardwired”. “Hardwiring” sounds serious and informative and conjures up a host of images, which may or may not be of use (example here). For better or for worse, it is a word with which we are now encumbered. It is perhaps useful then to ask where and when this adjective originated and how it came to influence neuroscience. 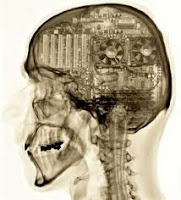 The OED notes that the first usage of the word was in computing, where it meant: “employing or containing permanently connected circuits designed to perform a specific, unchangeable, function; (of a function) achieved by such circuits; built into a device in this way.” It finds that first usage in Mechanised Accounting in 1969 and then notes its appearance in this form in several places thereafter including Scientific American in 1973.

"Hardwired" was first used in connection to the function of the brain and the nervous system in an article in New Scientist published in 1971 in reference to the links between the eyes of a kitten and its brain. A similar use appeared in 1975 in Scientific American and again it appeared in the context of vision and the cortex. On their own these references probably do not explain how the word disseminated into neurobiology, evolutionary studies, neurology and psychology. That fact can probably be attributed to Carl Sagan. In his 1977 The Dragon’s of Eden: Speculation on the Evolution of Human Intelligence, Sagan observed:

What is the information content of the brain? Let us consider two opposite and extreme poles of opinion on brain function. In one view, the brain, or at least its outer layers, the cerebral cortex, is equipotent: any part of it may substitute for any other part, and there is no localization of function. In the other view, the brain is completely hard-wired: specific cognitive functions are localized in particular places in the brain. Computer design suggests that the truth lies somewhere between these two extremes. On the one hand, any nonmystical view of brain function must connect physiology with anatomy; particular brain functions must be tied to particular neural patterns or other brain architecture. On the other hand, to assure accuracy and protect against accident we would expect natural selection to have evolved substantial redundancy in brain function. This is also to be expected from the evolutionary path that it is most likely the brain followed.


It is difficult to know why Sagan mobilized this language. Certainly he would have been aware of trends in A-I and A-Life, computing, and physics. He may also have been reading Scientific American and picked up on the language there. There can be little doubt, as Margaret Boden’s Mind as Machine makes clear, that linkages between the cognitive sciences and computing were legion.

Yet what is interesting is that Sagan did not abuse the metaphor in the way that it has been subsequently. He adopted a quite modest and refined approach that can be usefully contrasted with the rather more shrill uses of the word in our contemporary moment.

The redundancy of memory storage was clearly demonstrated by Karl Lashley, a Harvard psychoneurologist, who surgically removed (extirpated) significant fractions of the cerebral cortex of rats without noticeably affecting their recollection of previously learned behavior on how to run mazes. From such experiments it is clear that the same memory must be localized in many different places in the brain, and we now know that some memories are tunneled between the left and right cerebral hemispheres by a conduit called the corpus callosum.

It is sometimes argued that cuts or lesions in significant parts of the cerebral cortex in humans – as by bilateral prefrontal lobotomy or by an accident – have little effect on behavior. But some sorts of human behavior are not very apparent from the outside, or even from the inside. There are human perceptions and activities that may occur only rarely, such as creativity. The association of ideas involved in acts – even small ones – of creative genius seems to imply substantial investments of brain resources. These creative acts indeed characterize our entire civilization and mankind as a species. Yet in many people they occur only rarely, and their absence may be missed by neither the brain-damaged subject nor the inquiring physician.

While substantial redundancy in brain function is inevitable, the strong equipotent hypothesis is almost certainly wrong, and most contemporary neurophysiologists have rejected it. On the other hand, a weaker equipotent hypothesis – holding, for example, that memory is a function of the cerebral cortex as a whole – is not so readily dismissible, although it is testable as we shall see.