Neurologist Ludwig Guttmann and the Paralympics

Many people have lauded Ludwig Guttmann for his role in transforming human understanding of disability. By far the best source on Guttmann and his contribution is Susan Goodman's Spirit of Stoke Mandeville: The Story of Sir Ludwig Guttmann, a biography of the man worthy of borrowing from your local library since it is out of print. Here I quote from a few passages appearing in his many obituaries to give a sense of his achievements and their salience as London's opening ceremonies for the 2012 Olympics commence. Some of the context for Guttman's story can also be found in John Russell Silver's History of Spinal Injuries, a good source as well for those wishing to learn more about peripheral nerve and brain injuries that occurred during World War II. (The quotes below are from The Lancet, British Medical Journal, or Munk's Roll.) 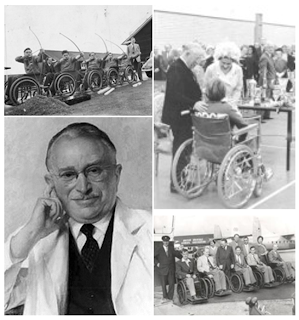 "All this was to prove the prelude to his life’s work, which began in 1944 when the Government asked him to start the first special centre for spinal injuries at , on the recommendation of George Riddoch, then neurologist to the British Army. Shortly afterwards, paraplegic patients from the D-day landings were admitted, and the National Spinal Injuries Centre was launched. It is as well to remember that all the great advances in this field have been made since the second world war, before which an injury of the spinal cord was virtually a death sentence."

"Ludwig Guttmann had the vision to realize that these patients could not only be kept alive but also rehabilitated to earn their own living, fulfil themselves, and not be confined to the scrap heap."

"Guttman saved and made worthwhile the lives of many thousands of very severely disable people all over the world, for he and his staff trained a very large number of colleagues from many countries in the specialized treatment of the paraplegic and tetraplegic patient."

It might also be worth noting of Gutmann that he took a great interest in the engineering of mattresses for hospital beds. Such considerations have had an impact on the quality of patient hospital experiences which while rarely remarked upon are nevertheless deserving of comment.